Murloc is a powerful race in Hearthstone. In the set League of Explorers, a new Paladin ability card called Anyfin Can Happen is released with the ability to summon 7 Murlocs that died this game. If there aren’t enough dead Murlocs, it may summon less than 7 Murlocs. 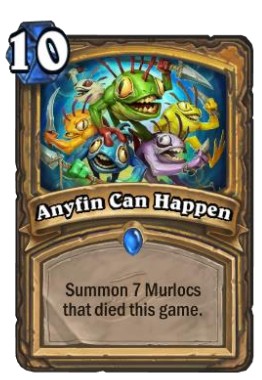 There are many different minions in Murloc race, here are four of them:

Old Murk-Eye: 4 MANA, 2 ATTACK, 3 HP. Charge. Has +1 Attack for each other Murloc on the Battlefield.

Here are some explanations:

MANA: The cost of summon the minion. Minions summoned by ability cards cost no mana besides the cost of the ability cards. Every player has 10 MANAs at most.

ATTACK: How many damage can the minion make once.

HP: How many attacks can the minion or heroes take.

Battlecry: An ability where a particular effect activates when the card with the Battlecry is played directly from the hand. The minions summoned by ability won’t activate their Battlecry.

Charge: Minions cannot attack at once when they are summoned unless they have Charge description. They will have to wait until next turn.

Battlefield: The battlefield (or game board) is where the action takes place, representing the board on which each game is played out.

Now, it is your turn. You have 10 MANAs and only one card: Anyfin Can Happen. There are nothing on the Battlefield, which means your minions can directly attack enemy hero. You can remember the list of dead Murlocs. You know how many HP the enemy hero remains. Will you win this game through this only card you have?

Then n lines follows, each line contains a string, indicates the name of dead Murloc. The string will only be “Coldlight Oracle”, “Murloc Warleader”, “Bluegill Warrior” or “Old Murk-Eye”.

One line per case. If you can win the game in this turn, output “Mrghllghghllghg!”(Without quotes). Otherwise, output “Tell you a joke, the execution of Paladin.” You will win the game if you attack enemy hero with your minions and make his/her HP less or equal than 0.

In the first test case, none of the Murlocs can attack.

In the second test case, every Old Murk-Eye has +2 ATTACK because there is another Old Murk-Eye and a Coldlight Oracle. So the total damage is 8.